Why use Windows Containers?

When creating database applications we need consistency in all our environments to ensure quality releases. Traditionally developers might have their own instance of SQL Server on their workstation to develop against. Database projects would be created in SSDT and pushed to source control when ready for testing. If you’re not using SSDT for database development already, then you should seriously consider it to make your life easier and increase the quality of your releases. Ed Elliot explains why in this blog post.

A problem with CI for databases is that databases are a shared resource serving many users. An application can be atomic and tested independently very easily. On the build server when we build and deploy our database for testing, we need to ensure that we do not create problems by interfering with other builds. For example if you take a feature branch and push that to the build server, if someone else has done that on their feature branch there is potential for code to be deployed to the same CI database server and increase the rate of false build failures.

Here is how the development cycle might look in the common way: 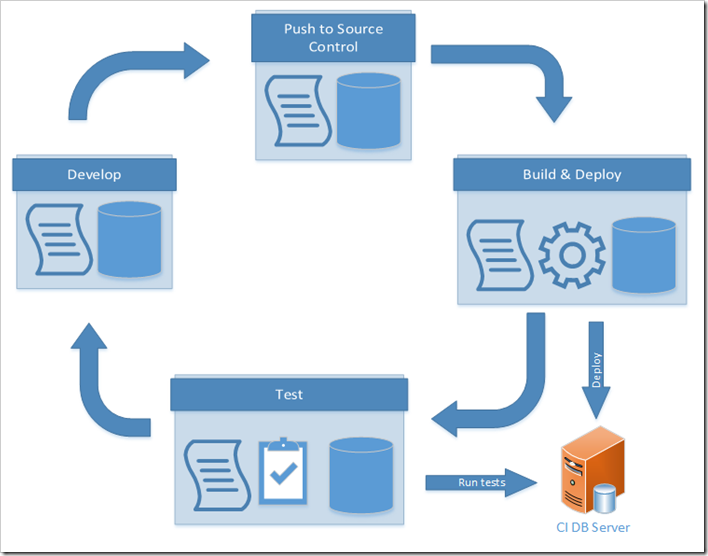 This is where containers can help.

Containers will give you a known, isolated environment for you to test your code in. You will not interfere with anyone else and the environment will be exactly the same every single time you deploy to it. There are some issues to overcome, but I’ll show you how to deal with those here. Every time you run a build and deploy, the process will create a container for you to deploy to that is isolated from all other builds. 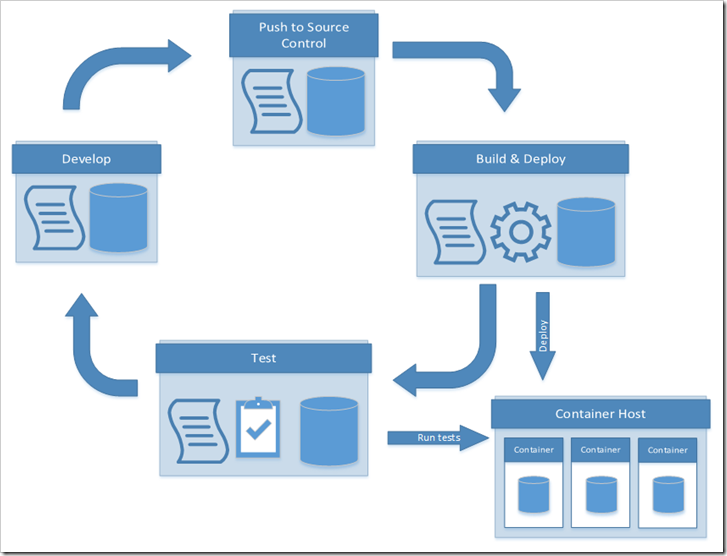 I have a test project on GitHub for you to play with here: https://github.com/markallisongit/mssql-docker-demo

Before we get started, if you want to follow along, we have some pre-requisites to do. I won’t go into detail on how to perform each of these steps for brevity, but it’s not hard and there’s plenty of information online.

We will use Jenkins as the build tool for this because it’s free and you can follow along. Create a multibranch pipeline project and link it to your source control. In Jenkins in Branch Sources, set it to: https://github.com/markallisongit/mssql-docker-demo.git. There is a config file in the project called config.json. Change the DockerHost to your own Windows Server 2016 box that has the containers feature running and push it back to your own source control repo.

In Jenkins, the best way to control a build is to use pipelines configured using a groovy script in a file called the Jenkinsfile. The Jenkinsfile for this project is broken down into the following stages:

Let’s go through each of those steps in more detail

Line 6 in the Jenkinsfile.

In Jenkins multibranch pipeline jobs, the build server will retrieve whatever branch has been changed on the git server. So if you’ve pushed a new feature branch for the project, you will see that Jenkins will create a new branch (if you have webhooks or polling enabled) and start a build. This step will checkout the branch concerned.

Line 12 in the Jenkinsfile.

In Jenkins, if you install the MSBuild plugin you can configure different MSBuild versions. Go to Manage Jenkins –> Global Tool Configuration and set the path there.

This will run the tool MSBuild against our test project.

Have a look at the CreateContainer.ps1 in a separate window and let’s break it down. All we’re doing is:

Note: A note on the sa password for containers. The docker image from Microsoft insists on strong sa passwords, so if you set something too weak in the config.json file your logins will fail. This is why in my example I have a complex looking one.

Now that we have our container created, let’s deploy our dacpac with a PowerShell script called Deploy.ps1. Breaking this down we are simply doing:

For step 8, go to Manage Jenkins and input your SQLPACKAGE location in Global Properties –> Environment variables like so:

Now that we have our code built and deployed to a container we can run tests on it to make sure the code is doing what it should, and then pass or fail this build. I have written a very basic pester test in file Deploy.Tests.ps1 that queries the SQL Server and makes sure that the table in the project exists.

The test does the following:

Make the tests as comprehensive as you like, I just want to demo something simple so only have the one here.

In a finally clause in our Jenkinsfile we have stage Cleanup to destroy the container we created so we free up server resources for other builds. Looking in the PowerShell script Cleanup.ps1:

Steps 2 and 3 can be combined into one command if you prefer– see the docker documentation for details.

Notify in the Catch clause

I have not included archiving of artifacts in this demo for brevity. Usually I will test the BRANCH_NAME variable in the Jenkinsfile and archive build artifacts for main branches of code e.g. master, develop, release, hotfix and not bother with archiving feature branches. Feature branches are usually named the same as the JIRA ticket and then merged into develop branch once tests pass on the build server and after peer review.

Feel free to build on and share improvements to the above process in the comments below, hope this has been helpful and interesting to you as we enter the new world of containers (at least in the Windows world).