In this post I will look at git merge in Visual Studio, in particular merging down from master into a branch and at what happens to each commit. This post will not make a case for merge over alternatives such as rebase, though the findings will contribute to the workflow that will be decided upon.

All posts in this series on establishing a git workflow for VSTS and Visual Studio are:

If you have just landed on this post then a quick word on set up. This post builds on the git_workflow_sample_setup available on Github. For this post the sample has been cloned and pushed to VSTS. The previous posts describe the sample and steps to clone, reconfigure and push to VSTS from Visual Studio.

What is the expected end state?

Given the current commit history for master and merge_branch as:

Relying on Visual Studio’s integrated git tooling, the end result expectation for source (shown below) is:

And how did we get there?

An incorrect view I've held for a long time is around commits being time based, leading to an expectation in terms of commit history on the merge_branch as:

This came about through my use of git log, which by default presents commit history in reverse chronological order. I will later show how this is not the case.

The intended action is a merge down from master into the merge_branch working branch.

First, verify the merge_branch is the checked out or active branch by navigating to the Home view, select Branches and then double-click the branch or alternatively right-click on the branch to select Checkout as shown below. 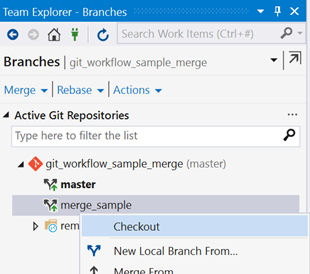 To merge down from master, right-click on the branch and select Merge From. Then in the inline popup, select master as the Merge from branch and click Merge. The inline popup changes to a merge conflicts warning, stating there is one conflict. 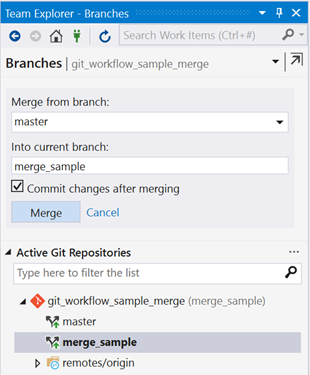 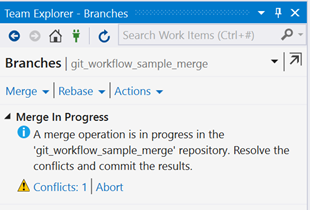 Before addressing the merge conflict it is worth taking a moment to look at the current changes (shown below) by navigating to the Home view and selecting Changes. 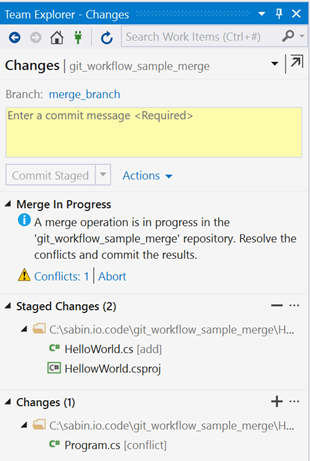 Here we can see the auto-merged changes, relating to the Hello World class created on master, that are now staged changes and pending commit, and the pending changes due to merge conflict that must be resolved manually. Double-clicking on the staged HellowWorld.csproj opens a diff showing the merge, as shown below.

Visual Studio does make working through conflicts reasonably straight-forward. By clicking the Conflicts link next to the warning triangle the a list of conflicts is presented and each can be worked through by clicking to select. When selected an inline popup with some merge options is presented as shown below. Before looking at merge it is worth looking at the two other merge options available. 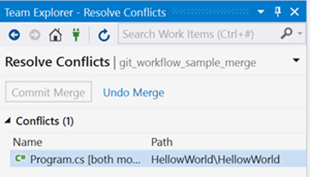 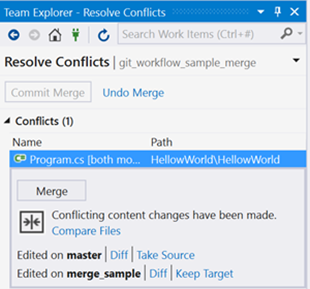 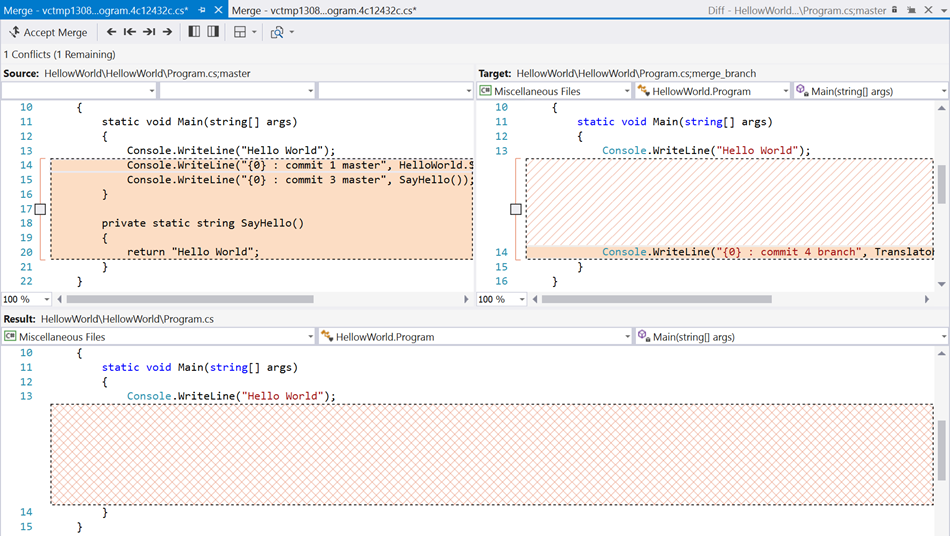 The result of selecting source changes from master first and then merge_branch is:

The result of selecting source changes from merge_branch first and then master is:

Neither are correct. Fortunately, to get the desired result the code in the result pane can be edited to arrive at the required merge result as shown

To complete the merge, click Accept Merge at the top of the merge code window, then Commit Merge in the Team Explorer Resolve Conflicts view, and finally entering a commit message before clicking Commit Staged as shown. 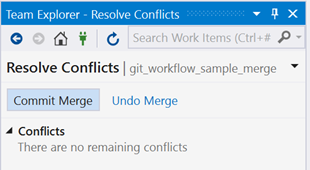 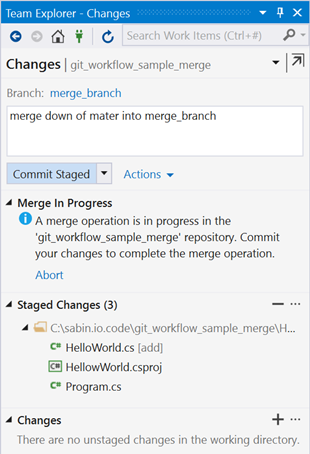 The expected end state for the code conflict merge has been arrived at however, the tooling only gets us so far and manual intervention inevitable. This problem is only around conflicting sections of code, for example the tooling successfully auto merges the xml project file.

And how did we get here?

The git merge flow presented by Visual Studio's Team Explorer views is easy to follow and intuitive however, insofar as resolving conflicts, it is possible to break code. Breaking code in one's development branch is less of a problem than breaking code committed to the remote repo, and so one needs to be careful with the Edited on master option and similarly carful when using the code merge tooling. The goal of establishing a git workflow sets out to limit the impact of these factors, which will be compared with rebasing and commit squashing in subsequent posts.

The end state for commit history on the merge_branch is acceptable for the branch however, it is not the ideal end state when pushing to master, and this will be further explored in a subsequent post on pull requests.