Git: How to work on a feature branch but pull in later commits from another branch?

On a client site last week the question was raised: I want to work on a feature for a project which will take longer than other people merging their branches into the dev branch. I therefore want to merge any changes on the dev branch into mine, test my changes before pushing back to the dev branch, and then and ultimately master for a release.

We are using a git flow methodology whereby the development manager will merge feature branches from developers’ branches via pull requests into the dev branch. Tests are run and if they pass, we merge into a release branch for that Sprint and run further integration tests. When these pass, the release is deployed to production and the release branch is merged into master and tagged as that release.

In an attempt to keep it simple, let’s walk through a demo of how working in parallel with another SQL developer on a database project might work, but we will omit the release and hotfix branches and instead merge from dev to master rather than via dev->release->master.

Set up the Repo

So, let’s create a new project called git-merge-demo and initialise the project with a git repo. 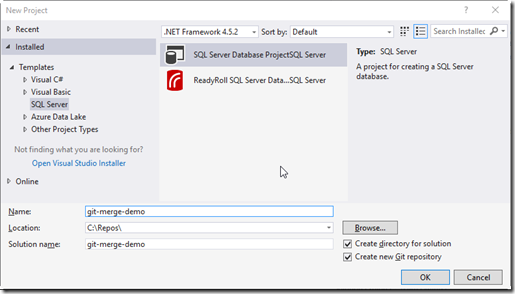 Let’s create a new table, new stored procedure and a publish profile. We need to add the existing .gitignore file and tweak that from the defaults. Add an Existing item and then browse to the .gitignore file in the repository. Comment out the line *.[Pp]ublish.xml because we want the publish profile to be source controlled. In Team Explorer –> Changes we can see that there are six changes since we created the repo to commit and then push up to GitHub: 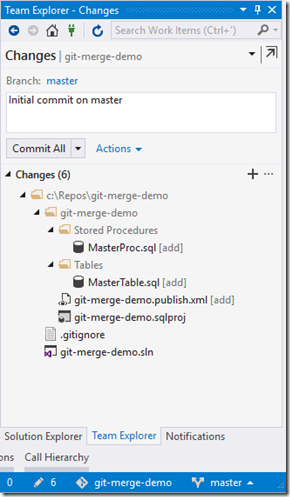 Once committed we can see we made a commit starting with hash value fe82ee96 (from now on I will just use the first four characters fe82):

This commits the file to our local repository but now we need to push it to the remote repository (GitHub). This was created for the demo: https://github.com/markallisongit/git-merge-demo

To add the remote to the local project simply run this in the root of the project on the command line (or it can be done within Visual Studio).

I can then Sync and Publish the changes to GitHub with this commit: 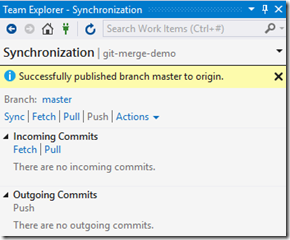 Now that we have created and pushed the master branch, we should create the dev branch and push that to GitHub. At the bottom right select master and then select New Branch

Type in the name of the branch and Create Branch. We are now in the dev branch locally.

If we now go to Team Explorer, and Sync and Publish the branch it pushes up to GitHub 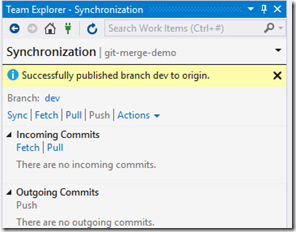 All good so far, we have our solution on the remote and we are in the dev branch with our initial objects. 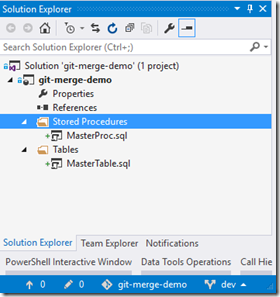 In a similar way we created the dev branch let’s create a feature1 and a feature2 branch, and then push those to GitHub. 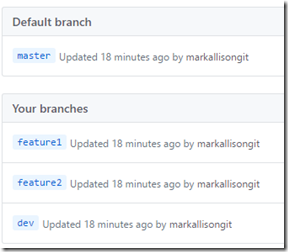 and locally it looks like this in Team Explorer –> Branches: 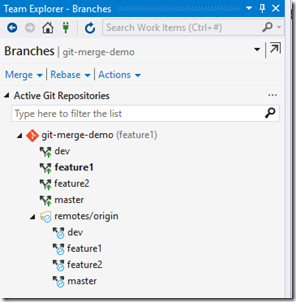 Make some changes to feature1

Let’s add a new table to feature1 and a new column to the master table. This will comprise the first set of changes to feature1. The solution now looks like this: 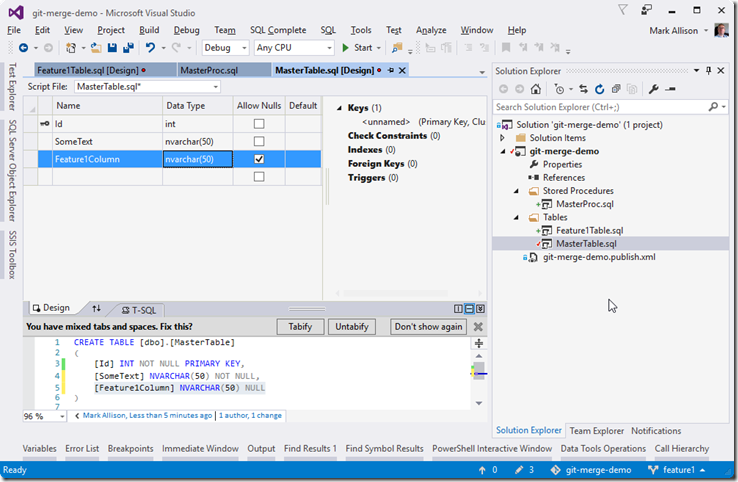 Let’s commit those changes locally by going to Team Explorer, Changes, entering a commit message. Then push to GitHub. The History now looks like this:

We can see here that the commit hash for feature1 is c174.

Switch to feature2 and make changes for feature2

Let’s suppose another developer has taken the dev branch and is working on feature2. Let’s create a new table for feature2 and add a new column to the MasterTable. First click at the bottom right on the current branch and then select branch feature2.

If you are following along on your own machine, you will notice that when switching to feature2, that the table Feature1Table and changes to MasterTable have been reverted to the dev branch commit. This is exactly what we want because we are developing feature2 independently of feature1, and are branching from dev.

We can now make our changes for feature2 and then commit and push to GitHub. The branch feature2 now looks like this: 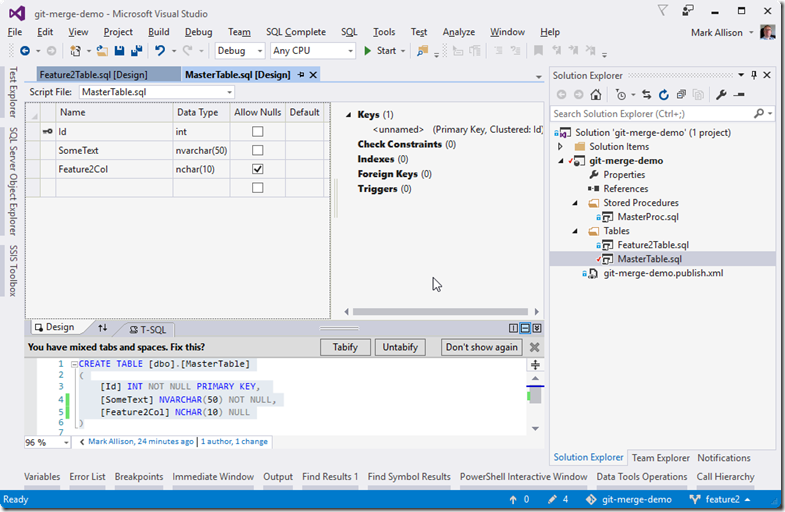 OK, let’s commit those and push to GitHub by going to Team Explorer –> Changes, type in a commit message and commit all.

This resulted in commit 48ee and here’s the history for feature2, notice that feature1 is not listed, because none of the code from feature1 is in feature2 right now.

Meanwhile the developer on feature1 needs to make another change to their feature. For this change I am going to use my laptop instead of my desktop to illustrate how different people on different machines can develop on the same project together.

Adding code to feature1 on my laptop

As this project doesn’t exist on my laptop I need to pull all branches from GitHub to it and then switch to the feature1 branch. Using the GitHub plugin, I click on Clone and then choose my GitHub project:

In Team Explorer, then select branches and in the remotes section choose the branch to switch to. Then select Checkout 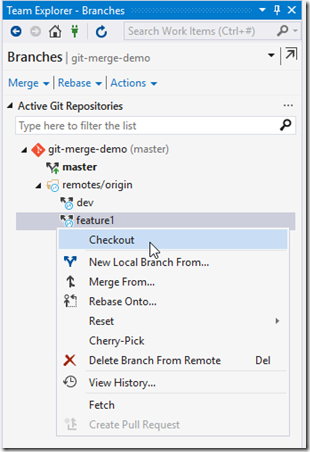 Now in Solution Explorer we can see that only feature1 is there. 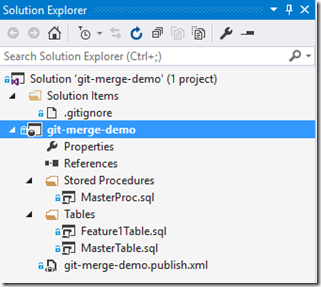 Let’s commit that on the laptop and push to GitHub. 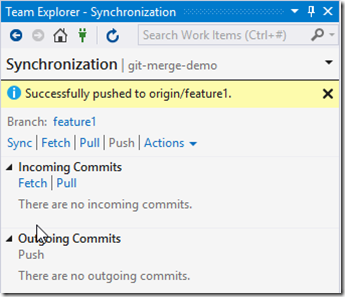 As a developer of feature1 we are happy with this change and now consider it complete. The auto-triggered builds and tests on the build server have passed so we create a Pull Request for the development manager to merge feature1 into the dev branch for further integration tests with other people’s code. The history for feature1 looks like this and we can see our latest commit with hash 062e:

On GitHub the developer creates the pull request like so:

The development manager should then be notified that there is a pull request waiting for review.

After peer review, the feature1 branch is deemed to be ready for the next stage so it is approved and merged into dev. The development manager has three choices now:

At Sabin.io we believe that any squash commits should be done by the developer before the pull request and not by the development manager, so at this stage we select create a merge commit. We can now see that this has been merged into dev. 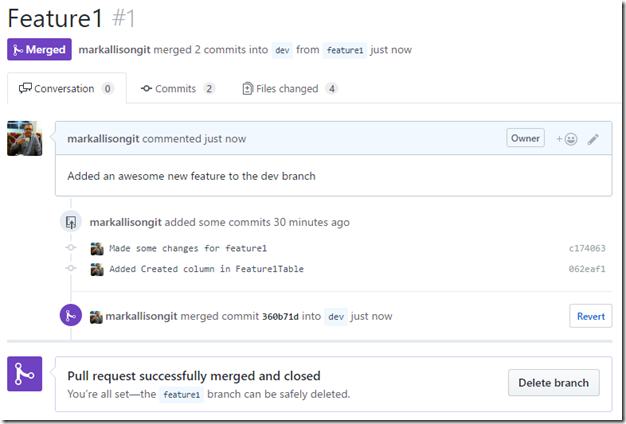 Notice that merging a pull request creates a new commit in the base branch, in this case the dev branch with commit 360b. We can now delete the feature1 branch as it is not required anymore.

At this point the developer on feature 2 needs to get the latest changes from dev onto the feature2 branch and do some work on that and then merge back.

We are merging into a feature branch and not a main branch like dev or master so we do not need the approval or sanction of the development manager to do this. In order to merge dev into feature2 on our local repo we simply merge locally by going to Team Explorer, Branches. Select the branch you want to merge from and to and then click Merge. This is what we do for our example: 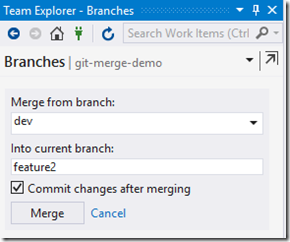 When trying to merge, we get two conflicts. Don’t panic. 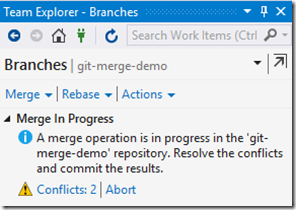 We need to look at each conflict in turn and resolve them. 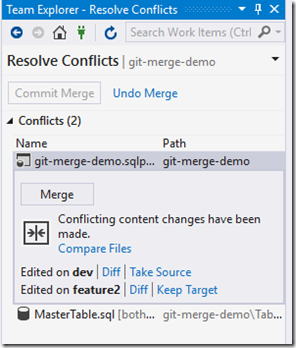 Because we are merging the changes made in feature1 into feature2, we need to make sure that both Feature tables are in the sqlproj file.

Tick the items you want in the result of the merge conflict. We want both tables. 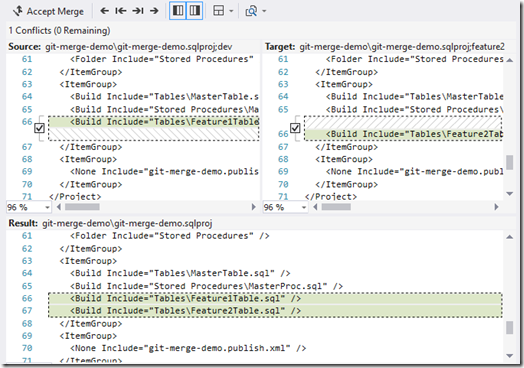 Click Accept Merge at the top of the window to merge the file.

Conflict 2 is trickier because the merge tool did not detect that column [SomeText] in the table is the same (probably to do with the CRLF problem!). Let’s tick the left side and then manually add the Feature2Col by copying and pasting that into the result. Here’s how it looked when the tool was opened: 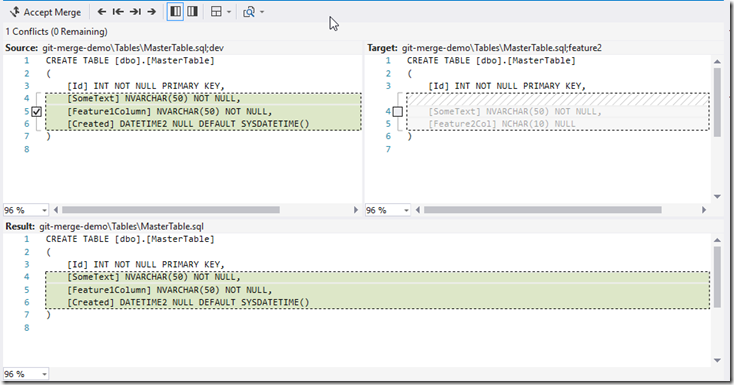 And here is how it looks after the merge work has been done, but before clicking Accept Merge. 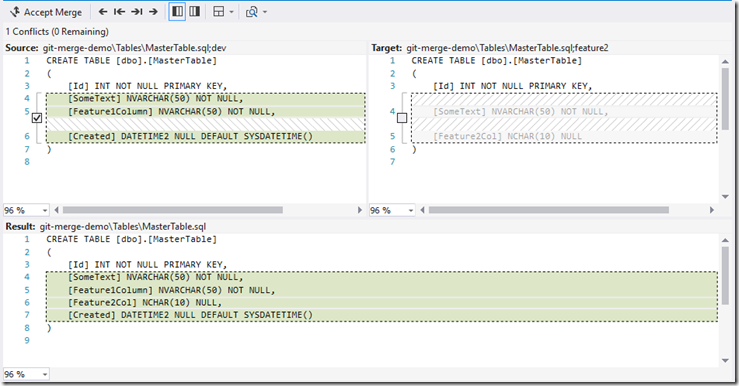 In Solution Explorer, if we now look at MasterTable and the other tables we can see the merge has been successful. 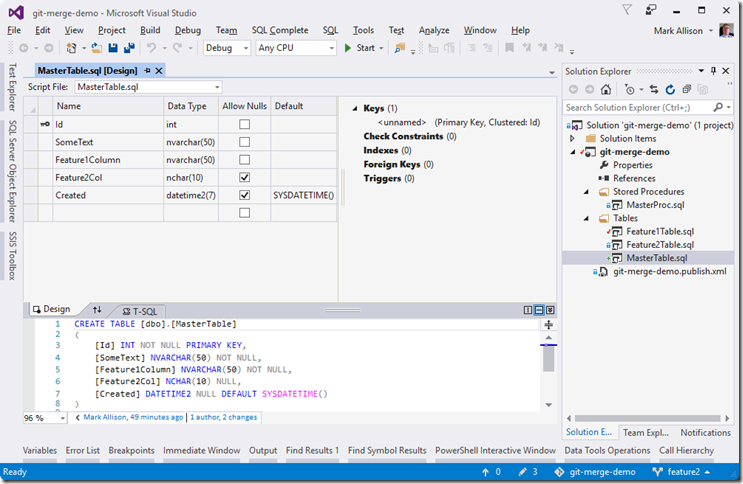 Both feature tables are there, and all the columns from both feature branches are in MasterTable. Now all we do is go back to Team Explorer and commit the merge to the feature2 branch. 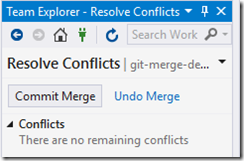 The history now looks like this on feature2 branch.

Let’s make our feature2 change that we wanted to base off the changes made in the dev branch. Stored procedure Feature2Proc was created.

Let’s commit that change and raise a pull request to merge it back into the dev branch.

After we’ve pushed feature2 branch to GitHub we can now raise a pull request to merge that into the dev branch. 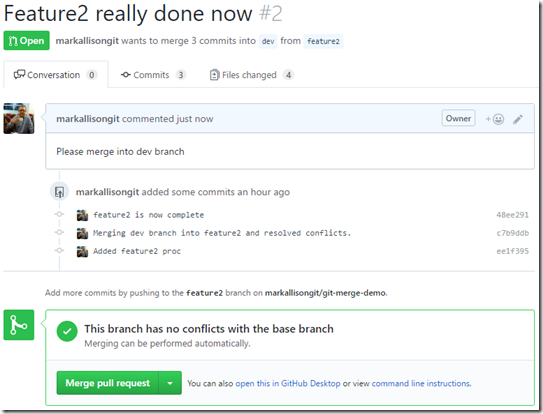 The merge was successful with commit hash 64c7 and we can now delete the feature 2 branch.

Merge back to master

Now that feature1 and feature2 is complete and merged into dev, we can run our integration tests on the dev branch to test everything still works. If that passes we can merge back to master with a new pull request from dev to master. 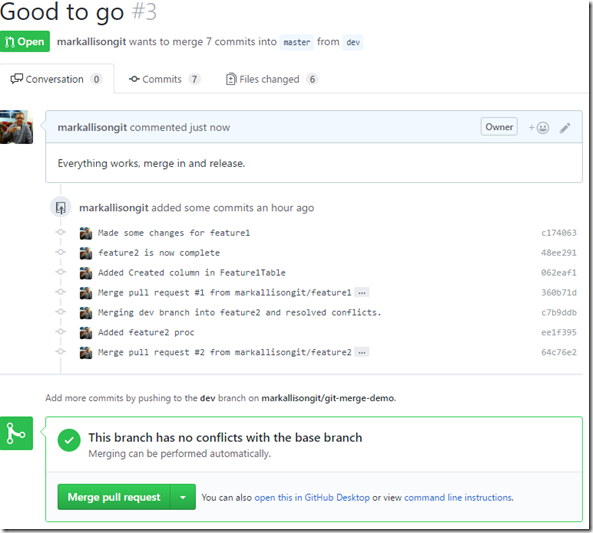 Merge back to master was successful with commit hash cb2c and we will keep the dev branch for further dev work. 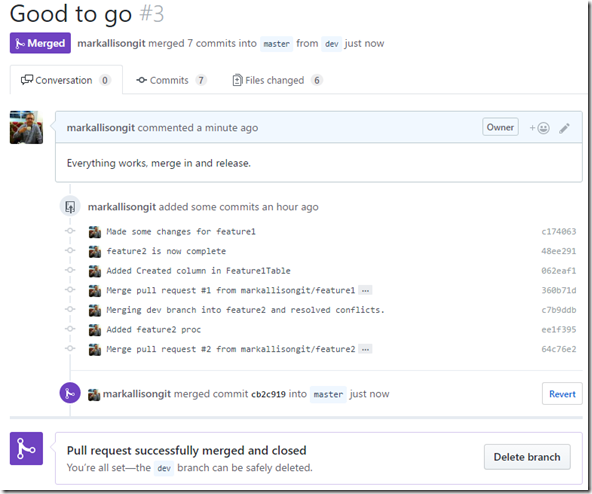 The above workflow can be summarised with the branches and commits in this diagram, which will hopefully make it easier to follow what happened. 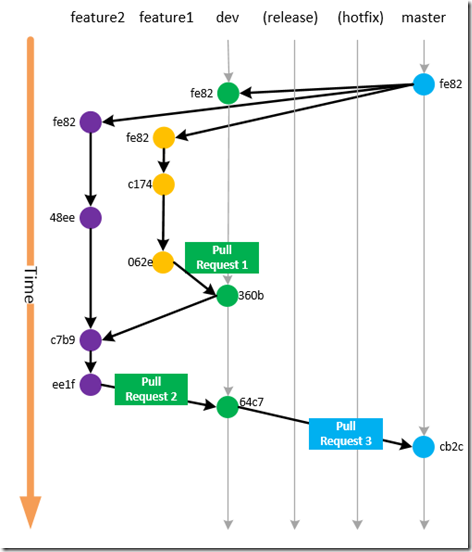 Here’s the commit history in master from within Visual Studio

Try it out for yourself and create a free GitHub account, or if you don’t want stuff made public, create yourself a VM and install GitLab (which is what I use at home for pet projects).

After all that merging, the project does actually deploy to a real SQL Server. This is the database after it has been deployed in SSMS: